Savant®, a leader in smart home technology, was honored with four prestigious awards at the 2019 CEDIA Expo in Denver, CO. The awards recognize Savant for contributing significant innovations to the luxury smart home market, providing new and exciting opportunities for integration professionals while changing the smart home experience for end-users.

For a control platform to win this award it speaks to the innovation delivered to both the custom installer or integrator, but also to the customer who will appreciate easier and more seamless control over the technology in their homes.

In 2016, Savant was honored with a Hall of Fame Award with the Savant Pro Host, and in 2017, the Savant System 12 was awarded for breaking new ground in the smart home market. This year, the Savant TrueImage user experience has been honored. Perhaps one of Savant’s most visually stunning innovations, TrueImage enables users to control their lighting from any Savant control system interface directly from a photographic image of the room. Simply touch a light to turn it on/off/dim.

Savant has been awarded a CEDIA best new product award for their Breaker-Companion Modules, which provide energy and lighting control with built-in utility-grade energy monitoring, data on historical energy usage and dynamic control throughout the home.

Energy management and reporting will undoubtedly become a necessity for every home owner who want to monitor and gather historical data of their energy usage. Get this Savant Energy management installed and integrated by the highest rated smart home pro digital living.

The Breaker-Companion Modules and Dynamic Load Management features provide energy management functionality at the individual load level throughout the home. These innovative modules have been designed to fit into standard electrical panels, eliminating the need for proprietary panel solutions. Savant’s Breaker-Companion modules are also compatible with Apple HomeKit. There has never been a smart home solution like the Breaker-Companion Modules, engineered to deliver monitoring, control and energy management all from a compact, easy to install form factor.

One of Savant’s most requested features by both consumers and integrators is the integration with Apple TV and Siri. Savant users can now simply use their voice to control Siri to find a movie, an album, an artist, playlist, streaming service and more. This might even help with more complex systems where a traditional Xfinity voice remote can be replaced with Savant remotes

Savant is a recognized leader in home control and automation, and also is one of the fastest-growing smart home companies in the smart home sector. Savant control includes climate, lighting, entertainment and energy – together in a single application interface for the homeowner. Savant’s whole-home or property control system, iOS and Android compatible, delivers the premiere experience in all of home automation and is available by Digital Living, who is the highest rated Smart Home Integrator in Northern California.

Get a Free Savant Quote:

Savant is ramping up its efforts to be the leader in the Smart Home control industry with the release of several products and software upgrades. Savant 8.3, includes a new more powerful single-room controller, garage door entry system and music server. Also, what is exciting for integrators is that Savant has increased the flexibility for both integrators and end users to customize the interface.

“This is the first major release since I returned as CEO,” says Bob Madonna. He outlined how the Cape Cod, Mass.-based company overhauled its entire beta testing processes to get even more dealer investment in testing. The goal is to produce the highest quality luxury home automation products in the marketplace,” says Madonna, noting that many of the products spent months in beta tests with hundreds of integrators. “Quality is king…”

Savant Simple Host + Pro Remote –A $500 control system that is highly configurable can be used  for up to two zones and It includes the controller and a Pro Remote.

Dedicated Garage Door Entry UI – The new dedicated garage door entry UI not only controls the door, but also indicates the status of the door (open/closed), accommodates a surveillance camera view of the garage, and sends notifications to the homeowner.

Ability to Reorder Services in Blueprint 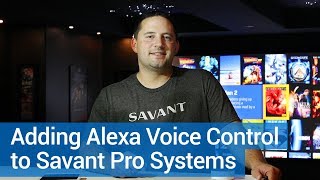 Digital Living 7X Mark of Excellence Experienced Technology Advisors
Digital Living is the 7X recipient of the Tech Integrator "BEST OF" for our commitment to unmatched engineering, customer service, and experience.